HomesNOW! – Letter of Fact Regarding Donations

HomesNOW! – Letter of Fact Regarding Donations

I would like to talk about where we are at with HomesNOW currently.

We have made some progress on some things and very little on others.
We started this adventure in June of 2017 and have learned so much in the last year.
Some of it good and some of it bad. We have grown a lot over the last 11 months.

We have gone from it just being Doug and Myself doing most of the work to having the help of many volunteers.

Now we are building up a great group of staff that are still made up of all volunteers.
Which is one of the reasons how we get so much done on so little of money.

Besides not having the cost of overhead we have people that are here helping because they want to be here not because of a paycheck. I am not saying those that are paid to do this type of work don’t do a good job I am only pointing out that when it is volunteers they have the same goal as Doug and I have and that is to get our project completed so we don’t have to keep doing this endlessly.

To Doug and myself this is not a career or to create personal income but rather something that needs TO BE DONE AND NOT TALKED ABOUT.

Here is a list of things we have done since we started in June 2017.
1. We have built 3 tiny homes on Lummi Nation
2. We held a sleep-out on city hall lawn for 18 days to raise awareness about the homeless camp sweeps.
3. we have held monthly Homeless summits since July 2017 only missing one month that makes 9 summits.
4. We put lots of pressure on the city government and now have 4 porta potties and dumpsters around town for specifically for the homeless people
5. We now have made it so people sleeping in their cars can do so without fear of tickets and harassment.
6. We now have a storage unit to keep stuff for our summits
7. We now have an office that has increased our productivity and effectivness.
8. We have gained a majority support from the county council to work with us.
9. We have started building an activist network and we are growing stronger and more effective every day.

I would like to talk about donations we have received as some have expressed concern over how the funds are being spent.

Yes – our main mission is to build tiny homes for the homeless and we have worked tirelessly to do this however we have hit roadblock after roadblock with the city and this has slowed us considerably, mostly in issues related to strict land and zoning rules. I know some people donated to build tiny homes and perhaps they are not pleased with spending the money on things other than building these structures.

Doug and I have talked a lot about this. We both came to the same conclusion. While we are waiting on the city or county or to find land on our own we would rather use the money we have to help the homeless population in whatever way we determine we can to do that is most beneficial and to address immediate needs until we can build more tiny homes.

We have set aside money in a savings account specifically for tiny homes but at the same time we are not comfortable sitting on cash when homeless people need help NOW. With that in mind Doug and I have made a choice to help when we can with the resources we have, within reason.

That has allowed us to get people shelter and sleeping bags when they are needed or to buy someone a bus ticket home if they can prove where they are going and they have a place to live when they get there. By doing this we have been able to get 5 people home to family and yes, they do keep in touch and are housed and doing well.

We have used some money to put people in motels that maybe just got out of hospital and have no place to stay even though the doctors have told them to stay off their feet or whatever.
We have used some funds to help feed people at our Summits. We have used every penny to help homeless people in one way or another.

We have not used the money for our personal gain at all. Here is a picture of how HomesNOW distributed funds from donations. Every penny has gone to help homeless people in need. 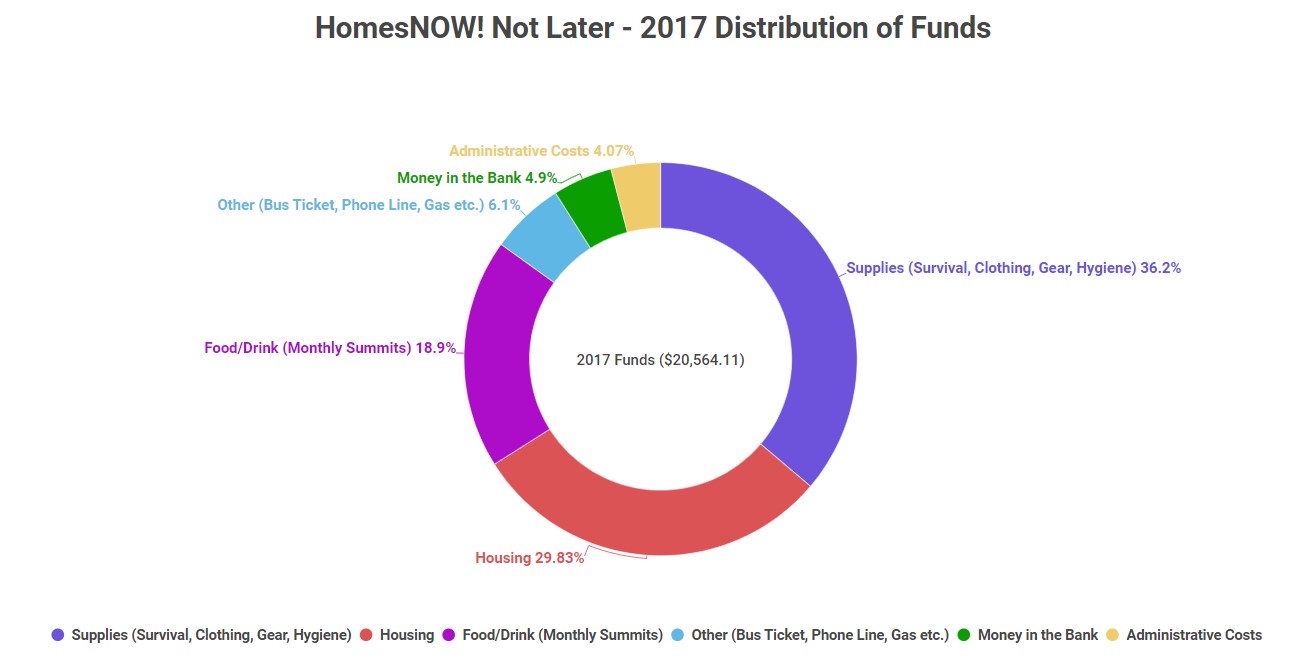 IF we are sitting on money waiting to build tiny homes (with no land available at the moment) then we are just not doing what we set out to do and that is to homeless people and alleviate their suffering and provide for their immediate needs. Helping the homeless community in general while we’re trying to find land continues to grow community support in general which increases the chances of being able to find land.

We have been careful of how we spend the money however we have spent some on things other than construction of Tiny Homes. We are here to help homeless people and we are going to keep doing just that. Right now, we are working on projects that will be needed in any tiny home community or tent encampment but can be used right now to help people in need regardless. One of these projects includes a mobile shower unit, so those living on the street can take a shower when needed. So please know when you donate to HomesNOW we are going to use the money to help Homeless people.

Our intention is to build tiny homes and help people re-integrate back into being functional members of society however if a person needs assistance NOW then that becomes our priority – to directly help homeless people NOW.

About the Author: Jim Peterson 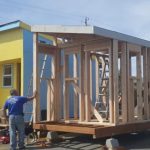